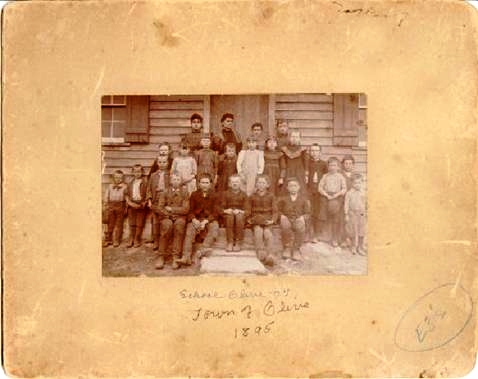 Look at the scuffed little sepia photograph below. It depicts young white/European primary school children in Salina, Kansas, USA in 1895. The children seem to have an average ageÂ of about ten or eleven â€” some some are obviously much younger.

The photo was sent to me, along with an educational archive, by a friend who devotes her retirement years trying to help youngsters in prison achieve a rudimentary education so that they might be able to be useful members of society when they regain their freedom. I expect the photo and the accompanying text has â€˜done the roundsâ€™.

A high proportion of the children in the photo will have had ancestors from the British Isles. They certainly look very similar to photos of British schoolchildren in village schools in 1895. Iâ€™m sure you could Google-up such pictures. I bet they played the same kind of playground games handed down to them by their forebears over centuries (see books by Iona and Peter Opie, especially this one from Amazon.

Read Lark Rise to Candleford, available from Amazon through this link, which recounts the lives of English village folk (in rural Oxfordshire) in about the same period. The chapter devoted to the village school is especially revealing. Lark Rise and numerous archives of English school childrensâ€™ work from that era provide an amazing (and shocking) contrast with what British children were expected to achieve â€” and did achieve â€” before they left school aged 14 (or younger!) with the scope of work produced by 17 year-old school leavers today â€” often â€˜achievingâ€™ A* GCSE grades!!

Have you ever read the well-written, fluent and moving letters home of teenage British lads from humble backgrounds sent from the trenches of the First World War? They knew history, the songs of their ancestors and poetry as well as having a good grasp of arithmetic, spelling and other practical skills.

Contrast their output with the monosyllabic pseudo-â€˜Afroâ€™ grunts of teenagers today, who know nothing about anything, except how to play the latest computer games featuring explosions, car chases and mass murder.

The eighth-grade final exam below was taken from the original document on file at the Smokey Valley Genealogical Society and Library in Salina and reprinted by the Salina Journal.

All this should make us wonder: What are the ideas, the laws and the social changes which have caused British, American and other European nations and cultures to disintegrate? Why are we continuously called-upon to â€˜celebrateâ€™ that disintegration? What â€” or who â€” has implanted in our folk and kindred peoples a Death-Wish?

1. Give nine rules for the use of capital letters.
2. Name the parts of speech and define those that have no modifications
3. Define verse, stanza and paragraph.
4. What are the principal parts of a verb? Give principal parts of ‘lie,’ ‘play,’ and ‘run’.
5. Define case; illustrate each case.
6 What is punctuation? Give rules for principal marks of punctuation.
7 – 10. Write a composition of about 150 words and show therein that you understand the
practical use of the rules of grammar.

1. Give the epochs into which U.S. History is divided
2. Give an account of the discovery of America by Columbus .
3. Relate the causes and results of the Revolutionary War.
4. Show the territorial growth of the United States .
5. Tell what you can of the history of Kansas .
6. Describe three of the most prominent battles of the Rebellion.
7. Who were the following: Morse, Whitney, Fulton , Bell , Lincoln , Penn, and Howe?
8. Name events connected with the following dates: 1607, 1620, 1800, 1849, 1865.

1. What is meant by the following: alphabet, phonetic, orthography, etymology, syllabication?
2. What are elementary sounds? How classified?
3. What are the following, and give examples of each: trigraph, subvocals, diphthong, cognate letters, linguals?
4. Give four substitutes for caret ‘u’.
5. Give two rules for spelling words with final ‘e.’ Name two exceptions under each rule.
6. Give two uses of silent letters in spelling. Illustrate each.
7. Define the following prefixes and use in connection with a word: bi, dis, pre, semi, post, non, inter, mono, sup.
8. Mark diacritically and divide into syllables the following, and name the sign that indicates the sound: card, ball, mercy, sir, odd, cell, rise, blood, fare, last.
9. Use the following correctly in sentences: cite, site, sight, fane, fain, feign, vane, vain, vein, raze, raise, rays.
10. Write 10 words frequently mispronounced and indicate pronunciation by use of diacritical marks and by syllabication.

1 What is climate? Upon what does climate depend?
2. How do you account for the extremes of climate in Kansas ?
3. Of what use are rivers? Of what use is the ocean?
4. Describe the mountains of North America.
5. Name and describe the following: Monrovia, Odessa, Denver, Manitoba, Hecla, Yukon , St. Helena, Juan Fernandez, Aspinwall and Orinoco .
6. Name and locate the principal trade centers of the U.S. Name all the republics of Europe and give the capital of each.
8. Why is the Atlantic Coast colder than the Pacific in the same latitude?
9. Describe the process by which the water of the ocean returns to the sources of rivers.
10. Describe the movements of the earth. Give the inclination of the earth.